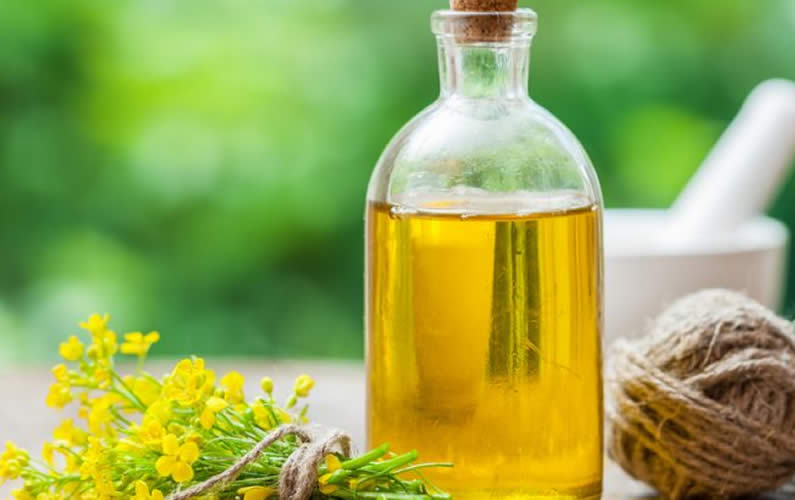 What is Rapeseed Oil?

Rapeseed oil is produced from the black seeds of the rapeseed plant, also known as Brassica napus. It comes from the same family of plants such as cabbage, broccoli, and cauliflower. Visually, the rapeseed plant makes for a lovely landscape surface during the spring when it sprouts vibrant yellow flowers. Its beauty however is much more than just visual, as this plant has some serious, wonderful uses as an oil.

Measured up against other oils, rapeseed oil has the least levels of saturated fat. In fact when compared with the mighty olive oil, it only has half the amount of saturated fat. Although we now know that saturated fat has been overly demonized, it is still a good idea to watch this macro nutrient when one is conscious of weight gain.

We will look more into this in a while. Rapeseed is also loaded with monosaturated fats, and is highly recommended for vegetarians. In cooking, it also can withstand more elevated temperatures compared to olive oil with a threshold of 230 degrees C. What’s more, rapeseed oil retails for considerably less than the other usual ‘healthy’ oils.

Here are more benefits of this lesser known but nonetheless, beneficial oil.

1. It is Abundant with Essential Fatty Acids

A noteworthy fact worth pointing out about rapeseed oil is it is loaded with omega oils which are typically sourced from in fish and fish products. It has been well publicized that omega-3 fatty acid is among the finest nutrients that can benefit brain health. It does this by enhancing the permeability of brain cells, promoting their communication. Omega 3 is also a strong antioxidant, and is great for joint health as well.

Essential fatty acid also includes omega-6 which benefits the respiratory system, circulatory system and the brain. Studies recommend that we should be taking omega-6 and omega-3 at a 2:1 ratio. Being plentiful with both is a great reason we should use rapeseed oil.

2. It is Abundant in Vitamin E

Vitamin E is present in a variety of foods such as peanuts, kale, spinach, almonds, sweet potatoes avocados, just to name a few sources.  It is worth mentioning however that plant oils are among the most abundant sources of this super anti-oxidant nutrient. Rapeseed oil is loaded with Vitamin E which is good for the eyes, skin, hair, as well as the immune system.

3. It is Low in Saturated Fat

So to reiterate an earlier stated fact, rapeseed oil easily has the least measured levels of saturated fat compared to any other oil. This qualifies it as a heart-friendly, weight beneficial choice. Rapeseed oil also has rich quantities of polyunsaturated fat, a fat that has been observed to lower levels of LDL cholesterol (bad cholesterol).

4. It has a High Smoke Point Which Makes it Great for Cooking

Chances are, like most people, you probably cook with some kind of oil. If you do, it is vital that you use one with a high smoke point or threshold to guarantee that the flavor as well as nutrients are not altered or lost. This same smoke point will ensure that dangerous free-radicals are not released as a by-product of cooking. Rapeseed oil has a much higher smoke threshold compared to other popular oils like olive and sunflower oil.

5. Rapeseed Oil is Loaded with Phytosterols

If we eat foods that are loaded with phytosterols, we preserve the positive activity of our cells, thus helping our immune systems to function at optimal capacity.

6. It has no trans-fats, no artificial preservatives and is GMO free.

The food industry is ripe with food-like products with little to no nutritive value, posing a problem to people worldwide. With the addition of rapeseed oil to most households, it could easily eliminate the use of trans-fats that have been linked to a slew of diseases such as obesity, cardiovascular disease, and metabolic syndrome.

7. It is ideal for a Gluten-free, Vegetarian, Halal and Kosher Diet.

In line with the nutrient-devoid diet that has become common nowadays, more people have switched to all sorts of diets. Rapeseed oil happens to be gluten-free, vegetarian, Halal and Kosher, making it a versatile cooking oil and healthy monounsaturated fat option.

8. Easily available in Most Supermarkets.

The great part about rapeseed oil is that itâ€™s now available in many supermarkets. No need to go to specialty food stores just to find this product. It comes in two varieties, and both are considered not just safe, but also effective for everyday cooking duties. The typical kind of rapeseed oil is usually merely identified as vegetable oil.

9. It Does not Turn toxic at High Temperatures Unlike Olive Oil.

Rapeseed oil is always compared side by side to olive oil, and while both may have health benefits on their own, rapeseed oil is better for cooking due to its higher smoking point. This means that it can withstand higher temperatures without becoming toxic, unlike olive oil.